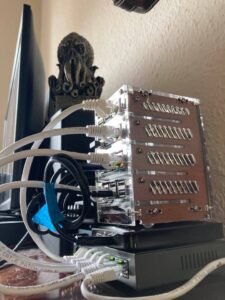 Well, it’s that time again! Nelefa.org has another new home. Still on a Raspberry Pi 4 (sort of) but instead of being on a little dedicated Pi, it’s now on the world’s smallest and most pointless compute cluster.

The cluster is built with a single Raspberry Pi 3B+ control node providing web servers, dhcp, nfs root and netboot facilities to (currently) three diskless Raspberry Pi 4s which netboot from control and mount their filesystems via NFS from a USB attached SSD (rationale being that contended NFS on a gigabit backbone STILL performs better than accessing an SD card.

As well as running nelefa.org and various other websites, the cluster is doing some distributed computing via boinc. Current compute status can be viewed in real time here or by clicking the cluster link at the top ^^

The Holy Grail of .muttrc Colors

Well, folks, it's taken me a bazillion and eleventy years to finally decide my...

A conversation with JD

The Strange Case of the Unexpected Fruit

Ok, so there I was standing in my kitchen and gazing with a little...

Easy recipe time. Before you start, make up a big ol' batch of Mix...