For those of you who may be reading on facebook, you might be better popping over to http://www.nelefa.org to read this. If you’re already here – well, that’s alright then 🙂

Ok, so these weren’t all necessarily released in 2009, but some of them were. They’re albums that affected me in various ways throughout the course of the year. They’re not listed in any particular order as it’s just not possible to compare them as they cross so many genres of music. For each album, I’ve suggested a couple of tracks that listeners unfamiliar with the artist can listen to to get a semi-representative view of the album. Bruce Springsteen – The Rising. Ok, so the boss is getting on a bit and maybe even getting a little introspective in his old age, but that’s not a bad thing. The Rising seems, at first listening anyway, to be a lot more spiritual than you’d expect from Mr Springsteen. There’s a lot of Gospel influences in here as well as the slightly-cheesy patriotic Americana we all know and love. I’d recommend listening to “The Rising”, “Worlds Apart”, and / or “My City of Ruins” for a bit of an insight into the overall tone of the album.

Note: if you find poignant songs about 9/11 annoying, you may rate this album slightly lower than I do. Sabaton – The Art of War. I seem to have arrived at the Sabaton party a good while after everyone else – I discovered them after Apple finally got Genius working as far as recommendations go. The Art of War is a stonking album largely based around, as you might expect from the title, various aspects of Warfare. Naturally, guitars dominate the album, but that doesn’t prevent Joakim BrodÃ©n’s titanic vocals from keeping you riveted in your seat for the duration. I’d recommend “The Art of War”, “40-1” and “Cliffs of Gallipoli” but this is really an arbitrary choice. There truly isn’t a bad track on the album, so take your pick. The Devin Townsend Project – Addicted. A little poppier than the other two, but don’t let it fool you – this is a seriously heavy album. Production-wise, it’s like a spiritual successor to something by Phil Specter – from start to finish, the album is a wall of sound. It has the same dominating qualities as something like, say, Blind Guardian, but presenting catchy pop songs instead of overly laboured bewildering slices of WTF?? There’s touches of KMFDM / Black Lung style industrial electronica mixed with grind metal all with garbage style guitar hooks and cheeky lyrics. There’s even a little bit of pathos in there. I’d recommend listening to “Bend it like Bender!”, “Supercrush!” and “Hyperdrive!” as a way of getting started.

Them Crooked Vultures. Well, any band featuring John Paul Jones, Dave Grohl and Josh Homme has to be something special. This is most definitely a special album. Soundwise, you get the impression of a very rough ‘everything in one take’ recording, which is perfectly in fitting with the musical style. There’s a bit of everything in this album; psychedelia, metal, rock, pop, beautiful harmonies and strangely effective discords. It also benefits from what is possibly the fattest guitar sound I’ve ever heard. I guess this is what you get when you stick three seriously accomplished musicians in one place and leave them to their own devices. This album manages to sound old and familiar at the same time as being new and exciting. Go figure. Really, you should just go and buy it immediately, but if you insist on recommended tracks, go with “No one loves me & neither do I” or “Elephants.” Turisas – The Varangian Way. This isn’t only the most epic metal album I’ve ever heard, it’s quite possibly the most epic ANYTHING. Varangian Way is Turisas’s second album and builds on their debut, Battle Metal, in almost every way. The same “viking metal” style is there, but the accordions have been replaced by full orchestration on many tracks. I wouldn’t say Varangian Way is better than Battle Metal because the two albums are complimentary and each serve their purpose equally well. Varangian Way just seems a little richer. Again, there Â isn’t a bad track on the album, but start out with “Miklagard Overture” and “Cursed be Iron”.

So there we have it. Notable mentions go to “Dark Passion Play” by Nightwish, “Marshall Mathers LP” by Eminem and about a million others, but those five up there have made the biggest impact on me. 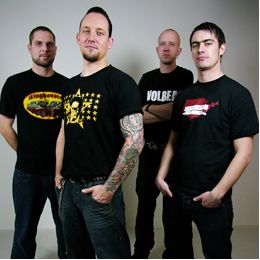 Despite loving music and loving reading, I very rarely do both at the same...